MONTGOMERY, Ala. — Amid a flurry of new limits on abortion being sought in states around the nation, Alabama is weighing a measure that would go further than all of them — outlawing most abortions almost entirely.

The effort in Alabama, where the State Senate could vote as soon as Thursday, is unfolding as Republicans, emboldened by President Trump and the shifting alignment of the Supreme Court, intensify a long-running campaign to curb abortion access.

Yet the Alabama measure is also a departure from the incremental strategy that abortion critics have often pursued: There is nothing gradual about the sweeping ban that the state’s lawmakers are considering.

Alabama’s measure would effectively ban most abortions at every stage of pregnancy, from conception on, and would criminalize the procedure for doctors. A doctor could be charged with a felony, and face up to 99 years in prison, for performing an abortion in most circumstances; a doctor could risk a 10-year prison term for attempting an abortion. Some exceptions were being considered, including provisions added to the measure on Wednesday that would allow abortions in cases of rape or incest.

“The back door hasn’t worked, I’ll just tell you,” said Representative Rich Wingo, a Republican from Tuscaloosa County and an architect of the Alabama legislation, which the State House approved last month. “Other methods haven’t worked to date. This is a yes or no, up or down.”

Some measures in other states have tested the boundaries of court protections for abortion in various ways. But the expansive Alabama legislation stands in direct opposition to the Supreme Court’s landmark Roe v. Wade ruling of 1973, which legalized abortion up to the point when a fetus is viable outside the womb, usually about 24 weeks into a pregnancy.

State Representative Terri Collins received a standing ovation after the abortion bill she introduced was approved by the Alabama House last month. The State Senate is expected to consider it on Thursday.CreditMickey Welsh/The Montgomery Advertiser, via Associated Press 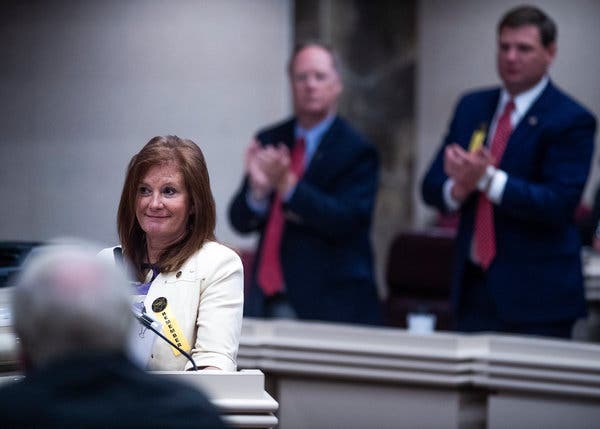 The move stands in contrast to the approach of conservatives in some other states, who have argued that a slower, piecemeal approach, chipping away at Roe v. Wade, is more likely to find success in the courts and result in lasting legal curbs to abortion.

“Our position is just simply that the unborn child is a person, and the bill goes directly to that,” Mr. Wingo said. “Courts can do — and have done — many things good and bad, but we would hope and pray that they would go and that they would overturn Roe.”

The differing tactics of abortion opponents have been on display this year, as new abortion restrictions have sped through statehouses in the South and Midwest. On Tuesday, Gov. Brian Kemp of Georgia signed a so-called heartbeat bill that essentially bans abortions after six weeks of pregnancy — a time when many women do not yet know they are pregnant. Kentucky, Mississippi and Ohio have passed similar laws this year, and legislators in South Carolina and Tennessee considered comparable restrictions.

Other states have taken more limited steps. Arkansas reduced by two weeks the time frame in which a woman can have an abortion legally. Missouri legislators have been considering an array of new limits.

“This legislative session could turn out to be the most harmful for women’s health in decades,” said Leana Wen, president of the Planned Parenthood Federation of America.

The proposal in Alabama, where voters amended the state Constitution last year to declare that the “public policy of this state is to recognize and support the sanctity of unborn life and the rights of unborn children, including the right to life,” is the latest far-reaching measure with a reasonable prospect of passing.

On Wednesday, a committee of the State Senate sent the measure on to the full Senate, after amending it to include exceptions for cases of rape or incest — exceptions that were not in the version of the bill the State House passed. The House version allowed an exception only in the case of a “serious health risk” to the mother.

It was not clear on Wednesday whether the House would go along with added exceptions, or whether the Senate committee’s changes would imperil the legislation.

Sam Blakely, who said she had an abortion after she was raped two years ago, testified before the legislative committee on Wednesday. The committee amended the legislation to include exceptions for rape or incest.CreditAudra Melton for The New York Times

In Alabama, a conservative state whose capital is dominated by Republicans, the number of abortion clinics has fallen to three from 13 over about the last two decades. In past years, lawmakers set a 48-hour waiting period for abortions; mandated that women receive counseling before undergoing procedures; and required minors to receive consent for an abortion from a parent or legal guardian.

Language in the new measure likens abortion to the Holocaust and other 20th-century atrocities, stating that the number of legal abortions performed since the Roe decision amounted to “more than three times the number who were killed in German death camps, Chinese purges, Stalin’s gulags, Cambodian killing fields, and the Rwandan genocide combined.”